I recently bought a number of AB 20MM WW2 German figures for use in "O" Group.  Although many players play in 15mm, I have been tempted by the AB 20MM range for a while now, so the "O" Group rules seemed like the perfect excuse.

I made a start on a few figures to test my painting skills - increasingly, I am finding that I can't paint in 15/18mm any more, even though I love the scale, but I figured 20mm would still be do-able.

"O" group uses combat patrols as markers and this would be a good way to test my painting.  Each company gets three combat patrols  for mine I decided two figures to a 40mm round base would work.

So here is the test combat patrol:

The painting seemed to work out OK - I could perhaps put an extra highlight on the faces. 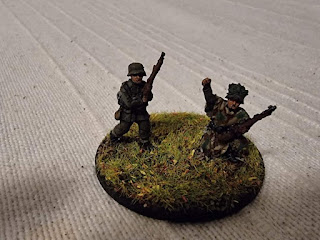 Combat Patrol 1 - 1st Company
The painting seemed to work out OK - I could perhaps put an extra highlight on the faces.  I'll finish up the other two bases for this company.  To help determine the companies I'll use a colour code on the back of the bases: Red for the 1st, Blue for the 2nd, Yellow for the 3rd and Green for any support options.