Finally a game with a real live opponent after all the disruption caused over the past couple of years by COVID-19.

I've been a big fan of the Too Fat Lardies "Chain of Command" rules set, but have not really had much of a chance to play except for a couple of solo test games.  So what better way to jump back into wargaming than with a full on pint sized campaign?

I've chosen to do the 29! Let's Go! campaign to start off.  It looks interesting and is a classic match between US and German forces in Normandy in 1944.  The aim of the campaign is for the Americans to Push the Germans back so they can take the bridge at Isigny and link the Utah and Omaha beachheads.  The Germans must delay them for as long as possible.  The campaign follows the US 175th Infantry Regiment as it moves inland to complete the objective. 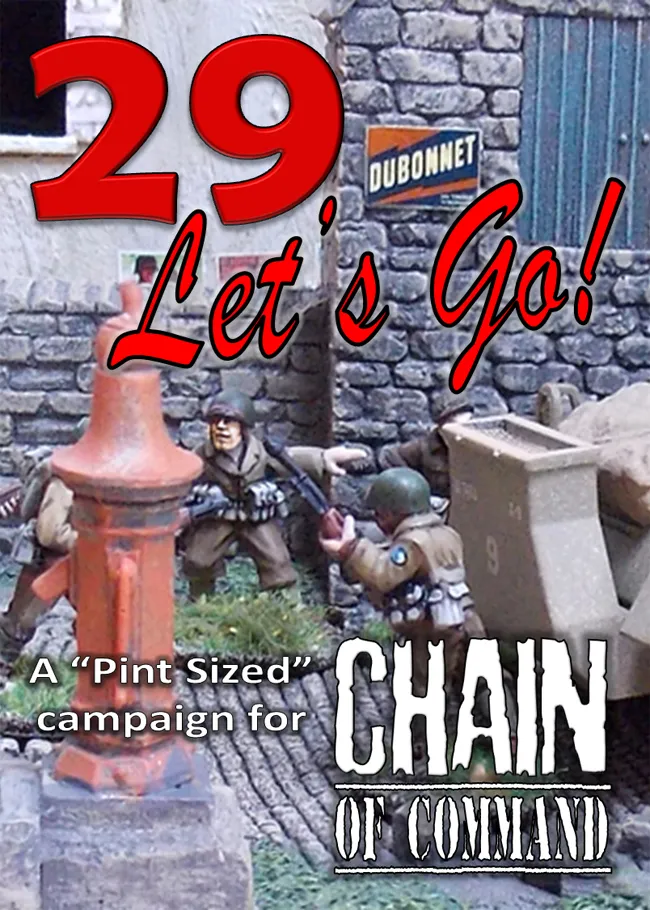 2LT Morrison bit his lip nervously and scanned the terrain in front of him.  He was crouched by the side of the road, his platoon sergeant, SSGT Kentner beside him.  The sergeant, a former farmhand from Missouri was chewing thoughtfully on a stalk of long grass. Up ahead Morrison could see a small hamlet – La Cambe – looking quiet and deserted.  He was a long way from Idaho, he thought to himself.  The easy life of college, of books and girls and beer, seemed a world away. He and his men had marched up from the Omaha beaches overnight, passing captured Germans and dead and wounded Americans.  The sight had shaken the whole battalion.  While the 115th and 116th regiments had assaulted the beaches the day before, it was now the turn of the 175th regiment to continue the advance.  Morrison raised his binoculars and peered through them.  Still nothing.  He glanced to his side and saw the men of his platoon – 6th Platoon, looking at him expectantly.  He peered back through his binoculars.  All seemed quiet.  He heard a whistle behind him and turned to look back.  Captain Whyte, the B company commander was indicating forcefully that he should move forward.  4th and 5th Platoons were, like his own, crouched in the ditches beside the road, also watching him intently.  The pre-briefing earlier this morning had made it seem so easy.  B company was to probe and capture La Cambe, A company would advance through them to assault Arthney, and C Company would act as reserve.  Simple.  Except now he was here, right at the sharp end of things, and suddenly it didn’t seem so easy.  He heard another whistle behind him.  He didn’t need to look back to get the impression the captain was growing impatient.  He let his binoculars fall, checked the action on his carbine and turned to SSGT Kentner.

SSGT Kentner nodded and spat the stalk of grass from out of his mouth. “OK you heard the officer! 4 Platoon, lets get in the war!”

Morrison whispered a short prayer to himself and moved forward."

The first Game map in the campaign is "Probe at La Cambe" The US forces need to get a team off the opposite end of the board: 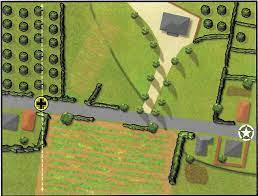 My interpretation of the map

The core force for this game is the standard US platoon - the US gets a fresh platoon each game.  For this first turn, I am taking 6th Platoon, Bravo Company, 1st Battalion, 175th Regiment.  Lets look at the key leaders in this platoon.

First we have the 23 year old 2LT Morrisson, a law college graduate who enlisted after finishing his studies.  Seeing his potential, the army sent him to OCS.  He is from Idaho.  He is ably supported in the running of the platoon, by SSGT Kentner, a 26 year old, former farmer from Missouri.  Squad 1 is led by SGT Dean a 24 year old former grocery store clerk from Alabama.  Second Squad is lead by SGT Connor a 32 year old former farmer from South Carolina.  The third squad is led by the oldest man in the company, the 37 year old SGT "Pops" Herbert, from Texas.  Unlike the others in the platoon, "pops" is a "Lifer" - one of the rare breed of pre-war soldiers.  Despite joining the army in 1934, he is still a squad leader having risen up the ranks and been busted down again more times than he can remember.

For support, I'll bring 3 Sherman tanks which allows me to upgrade one to a senior leader, and a mine detecting team of engineers.  The Commander of the Shermans is LT Roberts, 31, a pre-war soldier from Maine who was commissioned after Pearl Harbor.  The other tanks are commanded by SSGT Barron, 25, from Ohio, who was a teacher before the war - an intellectual looking sort, and SGT O'connor, a 41 year old former farmer from west Virginia, a real barrel of a man who can barely fit in his tank.   The engineers are commanded by Cpl Proctor, a 26 year old from Oregon who was a labourer before the war.

On to the game!